Anyone familiar with the process control industry knows that pressure transmitters are widely used. In a 5000t/d cement production line, the kiln head, the kiln tail, the top and bottom of the preheaters at all levels, each air duct and each room of the cooler, etc., must be equipped with process variable transmitters in these places. The purpose is to Monitoring the normal operation of the process is achieved through the use of these transmitters.

Now everything is changing with each passing day in the 21st century, and transmitters tend to develop towards digital intelligent transmitters. These third-generation transmitters use advanced detection technology to eliminate moisture, dust and other on-site harsh environments. Transmitter measurement effects. The adoption of advanced detection technology makes the accuracy better than 0.05%, the range ratio is expanded to 200:1, the range is finer, and the stability is more than 5 years; The transmitter guarantees a safe shutdown.

With the continuous development of the Shinkansen cement production line, the position of the pressure transmitter in the production application is increasing day by day.

2. Automatic controller part: This part must accept the signal sent by the EJA transmitter transmitter, in order to achieve the comparison with the liquid level height that the process must maintain, and further obtain the deviation. The purpose of obtaining the deviation is to calculate the result according to a certain operation rule, and then send the result with a specific signal pressure or current;

3. Actuator part: This part mainly refers to control valve and ordinary valve, which realizes some special functions. The controller relies on the signal sent by the EJA transmitter, and finally calculates and processes the specific signal, and then the actuator can automatically change the valve opening according to the signal value. 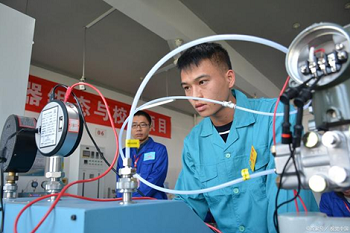 There will be some situations in the actual use of the EJA transmitter, which makes people feel at a loss. In fact, as long as the root cause is found, these problems can be solved very well.

Usually you will be very distressed at this time, but the most important thing is to find out what the problem is and solve it. If this happens, check whether the pressure interface is leaking or blocked. If not, you need to check the wiring method and power supply. When everything is normal, check whether the zero position of the sensor of the EJA transmitter has output. , or simply pressurize to see if the output changes. If there is a change in this way, it proves that the sensor of the EJA Yokogawa transmitter is not damaged. If there is no change, it means that the sensor has been damaged.

In the end, it is necessary to consider whether the instrument has been damaged, or whether there is a problem with other links in the entire system.

Once the pressure sensor has poor anti-interference and is easy to be interfered by the outside world, its value is reduced, and its application range is greatly limited. Pressure sensor is one of the most widely used sensors in sensors, and it is widely used in industry, agriculture and service industries.

To improve the structure of the pressure sensor, the introduction of interference can be avoided to a certain extent. There are the following ways: the signal processing circuit and the sensitive elements of the sensor are integrated into a whole, that is, integration. In this way, the signal to be transmitted is enhanced, and the anti-interference capability is improved. At the same time, because it is integrated, the introduction of interference is reduced; the integrated sensor has the characteristics of compact structure and strong function, which is conducive to improving the anti-interference ability; intelligent sensor can take anti-interference measures in software from various aspects, Such as digital filtering, timing self-calibration, characteristic compensation and other measures.