After the temperature transmitter completes the acquisition of the measurement signal, it is transformed into a unified 4 ~ 20mA current signal for output. At the same time, it also plays an isolation role.

Classified according to the working principle, it is mainly the difference of thermal elements,

There are: thermocouple, thermistor (metal), and semiconductor thermistor

The integrated temperature transmitter organically integrates the temperature sensing element (thermal resistance or thermocouple) with the signal conversion and amplification unit to measure the temperature of liquid, steam and other gaseous media or solid surfaces within the range of - 200-1600 ℃ in various processes. It is usually used with display instruments, recording instruments and various control systems.

The temperature sensor produces resistance or potential effect under the influence of temperature, and generates a differential voltage signal after conversion. This signal is amplified by the amplifier and then transformed by voltage and current to output a 4-20mA current signal corresponding to the measuring range.

Thermocouple is generally used for medium and high temperature measurement, while thermal resistance is mainly used for low temperature 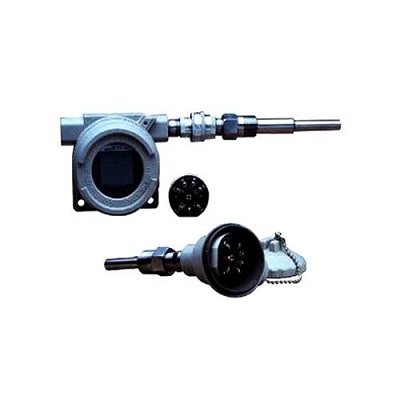 measurement. What to adopt? See the following introduction for details:

Thermocouple is one of the most commonly used temperature detection elements in industry. The working principle of thermocouple is based on seeback effect, that is, the two ends of two conductors with different components are connected into a loop. If the temperatures of the two connecting ends are different, the physical phenomenon of thermal current will be generated in the loop. Its advantages are:

① High measurement accuracy. Because the thermocouple is in direct contact with the measured object, it is not affected by the intermediate medium.

③ The utility model has the advantages of simple structure and convenient use. Thermocouples are usually composed of two different metal wires, which are not limited by size and beginning. There is a protective sleeve outside, which is very convenient to use.

The conductors or semiconductors A and B of two different materials are welded together to form a closed loop. When there is a temperature difference between the two attachment points 1 and 2 of conductors A and B, electromotive force is generated between them, so a large and small current is formed in the circuit. This phenomenon is called thermoelectric effect. Thermocouples use this effect to work.

2. Type and structure formation of thermocouple

① The welding of the two thermoelectrodes constituting the thermocouple must be firm;

② The two thermoelectric poles shall be well insulated from each other to prevent short circuit;

③ The connection between the compensation wire and the free end of the thermocouple shall be convenient and reliable;

④ The protective sleeve shall ensure that the Thermoelectrode is fully isolated from harmful media.