Piezoresistive strain gauges are one of the most common types of pressure sensors.They used the change in electrical resistance of the material as it was stretched to measure pressure.These sensors are suitable for a variety of applications due to their simplicity and robustness.They can be used for absolute, gauge,relative and differential pressure measurements in high and low pressure applications.

Various types of piezoresistive pressure sensors available, how they work, and their relative advantages.

The basic principle of a piezoresistive pressure sensor is to use a strain gauge made of a conductive material that changes its electrical resistance when it is stretched.Strain gauges can be attached to a diaphragm that recognizes a change in resistance as the sensor element deforms.The change in resistance is converted to an output signal

There are three independent effects that cause a change in the resistance of a conductor. these are:

The last term is the piezoresistive effect,which varies widely from material to material.Sensitivity is specified by the gauge factor,which is defined as the relative change in resistance divided by the strain: 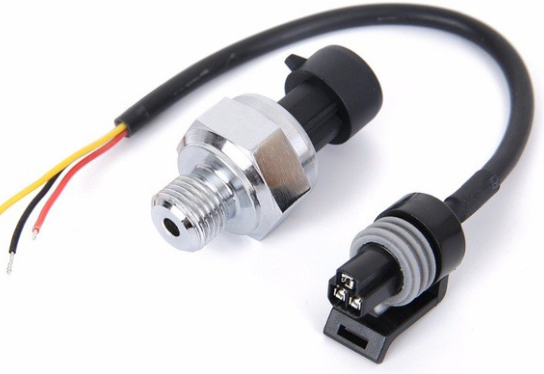 Strain gauge elements can be made of metal or semiconductor materials.The resistance change of metal strain gauges is mainly due to the change of the geometry (length and cross-sectional area) of the material.In some metals, such as platinum alloys, the piezoresistive effect can increase sensitivity by a factor of two or more.In semiconductor materials, the piezoresistive effect dominates, often orders of magnitude larger than the geometry contribution.

The change in resistance in a sensor is typically measured using a Wheatstone bridge circuit.This allows small changes in sensor resistance to be converted to an output voltage.Piezoresistive strain gauge measurements are made using a wheatstone bridge circuitAn excitation voltage needs to be supplied to the bridge.When there is no strain and all resistors in the bridge are balanced,the output will be zero volts.A change in pressure causes a change in resistance in the bridge,which produces a corresponding output voltage or current.

The pressure on the wire and changes the resistance.The sensor element can be bonded to the surface with an adhesive,or the conductor can be deposited directly on the diaphragm by sputtering.The latter approach eliminates the potential problem of adhesives failing at high temperatures,and also makes it easier to build small devices.Wire sensors can also be made by wrapping a wire between posts that are displaced by pressure changes.This structure can also work at higher temperatures because no adhesive is required to attach the wires to the posts.

Semiconductor materials,most commonly silicon,are also used to make strain gauge pressure sensors.The properties of the sensing element,especially the magnitude of the piezoresistive effect,can be tuned by doping; in other words,by adding carefully controlled amounts of impurities (dopants) to the semiconductor.More lightly doped silicon results in higher resistivity and higher gauge factor.However, this also increases the thermal sensitivity of the resistance and gauge factor.The piezoresistive effect is the change in electrical resistivity of a semiconductor or metal when mechanical strain is applied.In contrast to the piezoelectric effect,the piezoresistive effect only causes a change in resistance, not potential.

To ensure the highest accuracy, you need to consider several factors that can affect the output.Any change or noise in the excitation voltage will cause a corresponding change in the sensor output,will need to make sure this is less than the required measurement accuracy.May need to provide an adjustable calibration resistor in the bridge circuit to set the output voltage to zero when there is no stress,need to keep the resistance of the wires connected to the sensor small to avoid introducing an offset in the measurement and reducing sensitivity.Also,the temperature coefficient of the copper wire may be greater than that of the sensor, which introduces undesirable thermal sensitivity.Longer wires are also more likely to pick up noise.This can be minimized by using twisted pairs and shielding.Using a higher excitation voltage increases the sensor output and improves the signal-to-noise ratio.However, higher currents cause the sensing element to heat up, changing the resistivity and sensitivity of the sensor.This self-heating also affects the adhesive that bonds the strain gauge to the diaphragm, which introduces errors and causes accuracy to degrade over time.Using higher resistance strain gauges can reduce self-heating effects.Optimal supply voltage is a balance between minimizing self-heating and getting a good signal.You can determine this experimentally.For example, with no pressure and a sensor output of zero, you can increase the excitation voltage until you see a change in output (because of self-heating).The excitation voltage should then be reduced until the output error disappears.When possible, you should use the amplifier circuit close to the sensor to minimize connection length,enhance the output signal, and improve the signal-to-noise ratio.This can also do some filtering of the sensor output to remove external noise, can minimize the effect of any variation in excitation voltage, such as voltage drop caused by long wires, by monitoring the excitation voltage on the sensor and subtracting it from the sensor output or using it as a reference voltage for the analogue digital converter ( ADC).